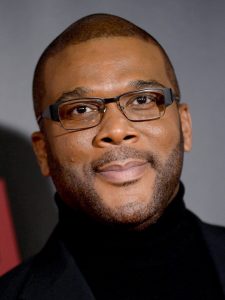 “Did you know you can’t say ‘Jesus’ in a sitcom? They told me that and I was like, You gotta be kiddin’ me. If you don’t want my God here, you don’t want me here either. God has been too good to me to go and try to sell out to get some money..It ain’t gonna happen.”

Emmitt Perry JR., also known as Tyler Perry was born in September 14, 1969 in New Oeleans, Lousiana. He is an American actor, screenwriter, producer, playwright, director and the songwriter. He has written many stage plays during 1990s and 2000s. Forbes named him as the highest paid man in entertainment in 2011 when he earned the net worth of $130 million between May 2010 and 2011.

He started his career from 1992 and he is engaging himself in this field till now. He has also created movies and produced live recordings of some play. He has also put his hands in TV shows where he has produced “Tyler Perry’s House of Payne”.  In his childhood, he had a strained and abusive relationship with his father which lead him to be suffered from depression as a teenager.

In 1991, while working in an office job, he saw an episode of “The Oprah Winfrey Show” which has discussed about the therapeutic nature of writing. It inspired him very much and he begins to write. He worked through his bad experiences by writing letters to himself. He took on a series of odd jobs and found himself living in his car. But, in 1998, he was given the second chance to stage his original play. The play sold out and drew attention from many reputed investors.

Before becoming a successful film-maker with Diary of a Mad Black Woman, he was already the owner of a successful play company that tours the country and caters to African-Americans. His plays are also recorded and sold as DVDs. His 8 plays have grossed over $75 million in tickets and DVD sales. He was ranked #7 on EW’s The 50 Smartest People in Hollywood in 2007. He has also worked in the construction before his film career took off. He loves to play with the children.

He is a very tall guy with the height of 6 feet 5 inch. He has reached the age of 45 from 2014. At this age also, his married status is single. Because of this reason, there has been a rumor that he is a gay. There had also been gossips about his girlfriend, dating as well as affairs. But he has always neglected them all. He believes in the fact that the marriage should be held between those who have one heart. He does not like the phenomena of divorce. Hope, he will find his required wife soon!!

He is available in social media as well. He has millions of fans following in twitter as well as in Instagram. He has played many movies which made him very popular. Currently, he is working for the movie “Gone Girl”. He is also planning to air the new show to the audiences.

His wikis as well as biography is available in Wiki and IMDB. His shirtless pictures are also available in the web. his podcasts as well as videos can be found in YouTube as well. To know anything about any celebs, do not forget to visit us.