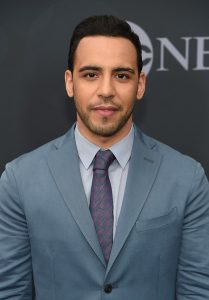 Victor Rasuk is an American actor who was born on the 15th of January, 1984 and is currently 31 years of age. He was born as one of the two children to a Dominican couple who had migrated to the states. His mother Arania Rasuk used to work as a seamstress and his father Darlin Rasuk owned an auto shop. Victor grew up with his brother Silvestre in New York City and the two had similar interests and hobbies. Attending a local public school, Victor first got the taste of acting there, when he performed from his school’s team in a community festival at the age of 12. He was in his school’s drama team and also played basketball as a child. Then he transferred his school and started to attend Performing Arts School. There, he got into acting and was almost a regular performer from the age of 14. He played many roles and also worked in Theatres for some time, before launching his professional career. He is born and raised as a Christian and belongs to white ethnicity, and is an American by nationality.

Victor first appeared in TV with a short film named Five Feet High and Rising, when he was only 16. The movie was made for the “Independent Spirit Film Festival” and the story and acting surely made it a hit, with Victor’s popularity rising. The film was so much appreciated by the audience that the director of the movie though about making it into a full length feature film. So he changed the name into Raising Victor Vargas and casted Victor in the lead role. Having already influenced the audience with the short version of the film, this long one was equally praised and loved and Victor’s role was widely appreciated. As a result, he won the nomination for the Independent Spirit Award. This made his platform strong as an actor and soon he started to get offers in other movies as well. He portrayed the role of Roc, a young vagabond man in the movie named Rock Steady, which was released in 2002. A couple of years later, he finished his studies and got a role in the film Haven, in which he played the lead role. His other hit movie was Lords of Dogtown, which was released in 2005 where he was seen as Tony Alva. The movie involved scenes in which the character had to surf as well as demonstrate skills on a surf board. Although the director used a professional stunt man, Victor himself performed some actions in the film which he says was fun.

Victor is not a very tall man, his height is only 5 feet 7 and last recorded weight was about 60 kg. As not much is known about his girlfriends and dating life, he is accused of being gay. He told in an interview that he has not been married yet, and that he is not a gay either. You can know more about him by following him on his Twitter and Instagram accounts. You can check out the list of his TV shows and movies in IMDB, and also read his biography in Wikipedia. With an estimated net worth of about 2 million dollars, you can follow his Facebook fan page to stay connected with him.