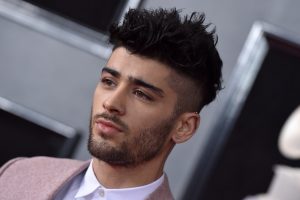 Zayn Malik was born in West Lane, Baildon, and Bradford, England. His parents are his father British-Pakistani Yaser Malik and his mother English Patrica. Talking about his family, he has younger sisters, Waliyha and Safaa and an older sister Doniya and a dog named Boris. The English and Pakistani descent Zayn was born on January 12, 1993.

Zayn Malik attended Lower Field Primary school and Tony High School in Bradford.  At the beginning of their career when he was 17 years old, he auditioned for X- factor in 2010 as a solo artist. He impressed all the three judges at the audition where he sang “Let me have you” by Mario. After the X-factor, One Direction signed a contract with Syco music.

One Direction, one of the most popular band songs “ What makes you beautiful” released in September 2011 in the United Kingdom topped the pop music chart which was their first single. Their debut album, “Up All Night “became a best seller in both United States and the United Kingdom in 2012.

The album has 13 singles with a total length of 45.12 minutes. Zayn admitted that he would have gone to pursue a degree in English literature if the band hadn’t been created.

Zayn Malik is best known as a member of the pop band “One Direction”. The sexy said, “I’ve smoked since I was 15”. But later in late 2011 he made quitting smoking a New Year’s resolution and quit smoking in early 2013.

He is 5ft 9 inches or 175cm. His hair color is black and eye color is light brown. His distinctive features are his Smiles, Tattoos, Eye piercing and Quiff hairstyle. His shoe size is assumed 8 ½. His body measurement is unknown. He loves boxing and used to box from the age of 15 to 17. He wants his dream body for which he is doing boxing, eating healthy and doing other exercise. He is not foodie at all but he enjoys pasta with Bolognese or Spicy chicken.

His favorite band is NSYNC (IMDb) and his favorite song in Thriller (By Michael Jackson). The hot Zayn shirtless pictures can be found in internet sites like Tumblr. by signing up.

Zayn Malik is known as the “Bad boy” of One Direction whose present girlfriend is Perrie Edwards. He has dated Geneva Lane, Rebecca Ferguson and Perrie Edwards, all former X-factor contestants.

Malik got engaged to Perrie Edwards, a singer with group Little Mix in August 2013. They met on the eighth season of the X-factor.

They have been dating for two years before their engagement. The international celebrity Zayn Malik was followed by fake rumors and the rumors was, Is Zayn Malik gay? Other rumor was he is going to quit one direction. “The rumors grow as it goes”.  However there is no evidence it was just speculation and rumors.