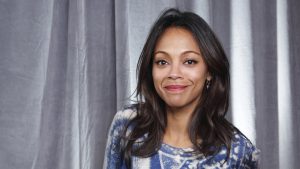 Zoe Saldana, until January 2013 when she finally split with boyfriend Bradley Cooper after flippy-floppy relationships since June 2011, expressed her views about her love for the opposite sex as  “ I Worship Men, Men are Adonises”  really revealed what she was doing in her life.  Again, she broke up with her previous long-time boyfriend & fiancé Keith Brittan earlier and said.” It didn’t work out; it was heartbreaking for both of us, but its life.”

This truly revealed that she was searching for the right guy in her life and wanted to settle even though having affairs and datings with so-called few boyfriends.

Some had even predicted that she is just another Tigerwood as she was breaking up and dating with her boyfriends and was saying,” I was with someone for a long I need to take a break. What if love is just around the corner?” It showed she was not satisfied with her current relationship and looking for someone the right guy in her life.

She knew she had to settle down and search for a restful, stable relationship out of many anxieties in her life and wanted to be with someone she enjoys. In April 2012, in Lifetime’s The conversation with Amanda de Cadnet, Saldana expressed her desire to settle and have a family on the next year (i.e. the year 2013).

Her utmost desire to settle down made herself to stick to co-star of “The words” Bradley Cooper for 2 years in which  she attempted hard and said after splitting up, “ after all it never meant to be……..” Its life and life goes on. Later in May 2013, there had been rumors that actress Zoe Saldana has secretly married with boyfriend Marco Perego while they were spotted together in a romantic trip to Capri wearing her engagement ring, and a golden band on the finger of  Perego, Italian born former soccer player, and an artist.

The ‘Avatar’ actress Zoe Saldana is now married woman which she dreamed of to be and finally secretly did it. In the ceremony there were only few close friends, and family.

Her husband and she were of the same age of 34 when found married. ‘Guess who’s coming to dinner,’ Star-trek, ‘Pirates of the Caribbean,’ and several big blockbuster shows and films she has contributed in the Hollywood Industry. She is hot and sexy black lady and her legs are rated beautiful feet on wikifeet website.